Kick Off the New Year with 4 Interior Design Resolutions

In celebration of Carolyne Roehm's latest publication, Design & Style: A Constant Thread, we chatted with her about how she fell in love with fashion and design, where she finds inspriation, and her favorite advice from over the years.

In your new book, Design & Style: A Constant Thread, you share details from your life story for the first time in print. What inspired you to do that?

I had never written about my age-long desire to be a fashion designer. I loved designing, and after a certain success, I encountered a period of tragedy and great sadness. Because of this, I made the decision to shut down my business, and that broke my heart. I completely walked away from anything to do with fashion. Time helps cure and finally I decided some 25 years later to revisit that time, and thus this new book that encompasses all aspects of my creative life, weaving them into my constant thread of design.

When did you first know you wanted to enter the world of design and fashion?

When I was in elementary school, I saw a movie where a character actually played dress-up and created clothes and accessories as a job. That taught me about the idea of being a designer.

Where do you find inspiration in your everyday life?

Nature is the grand teacher. We learn about line, proportion, texture, pattern and, above all else, magnificent color. I love working with color because it is fun and fascinating. The only thing I love more is playing with my dogs and growing flowers. A walk in the garden with my pups is without a doubt a joy.

What interior design look or theme do you see trending in 2019?

I have been saying this and hoping for the last 10 years that we do not lose the great artisans who have created so much beauty in the past. I am a classicist, and the rich design vocabulary of other times should not be discarded because it is not modern. I hope to see a stronger and better integration of the past with the present. No design is created in a vacuum. It is built upon the shoulders of previous creation. Thank God, I am so bored with plain white walls, with little character, and splashes of modern paint as wall decor with huge TV screens. I could do a dissertation on this subject!

I believe with all of my soul and my mind that the most important gift we have beyond our health is enthusiasm and curiosity and, of course, the ability to love.

Join us on Wednesday, November 14, 2018 from 5 p.m. to 7 p.m. for a book signing and exclusive design presentation by Carolyne Roehm at our Wisteria Dallas store.

As summer turns to fall, it’s only fitting that your home should reflect the changing seasons. The colors we decorate with influence our mood and affect how we interact with our space. Warm tones, such as reds, oranges, yellows and gold, evoke a sense of liveliness and intimacy. They give spaces more energy and make them more inviting, which is perfect as we enter the holiday season.

To prepare for the dropping temperatures, here are 4 easy ways to add touches of warmth throughout your home. 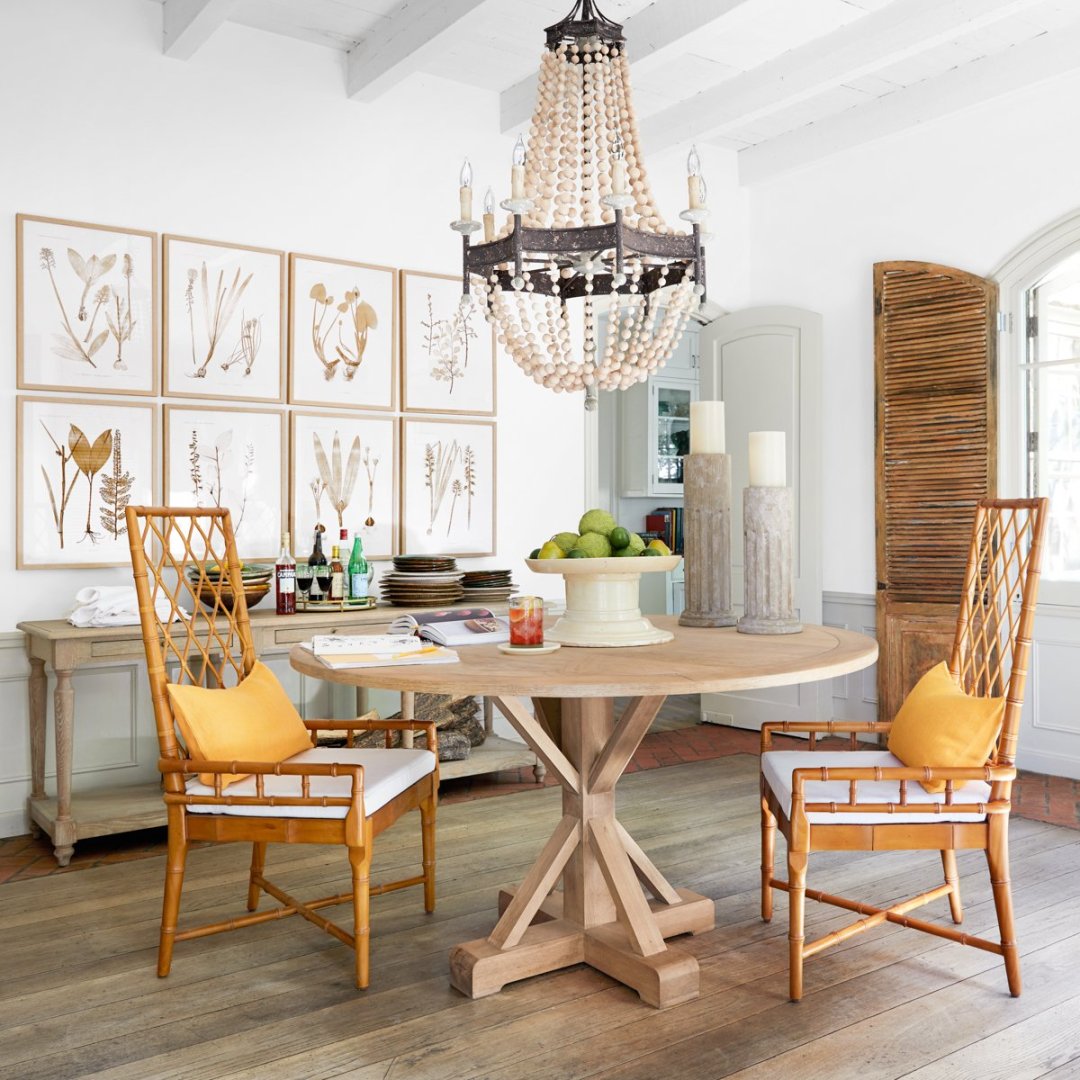 Add soft touches of warmth, in both color and texture. Pillows are an unexpected addition to your dining room, and every living room needs a cozy throw blanket for when temperatures drop. It’s the simplest way to change up a room. 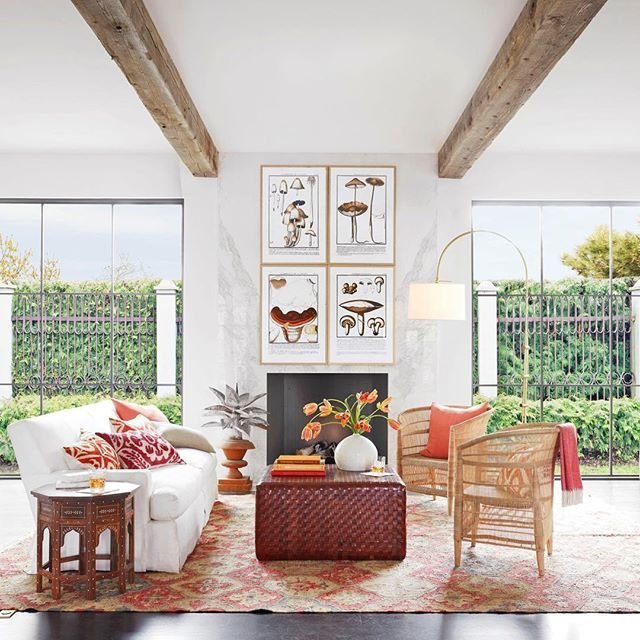 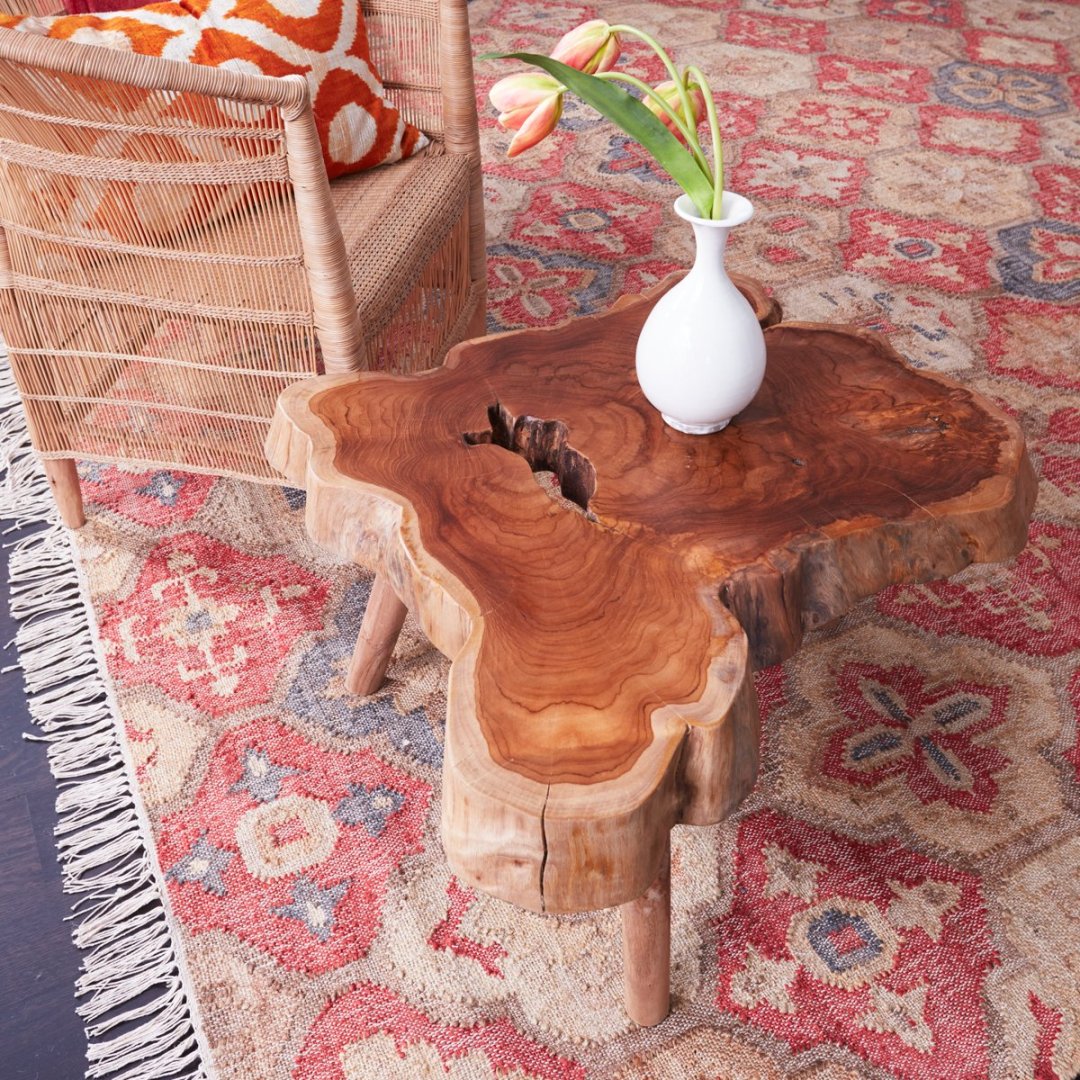 Start from the ground up and incorporate warm tones underfoot. Rugs are an easy way to change the color palette and tone of a room. Choose something durable for high-traffic areas and something a little plusher for relaxing spaces. 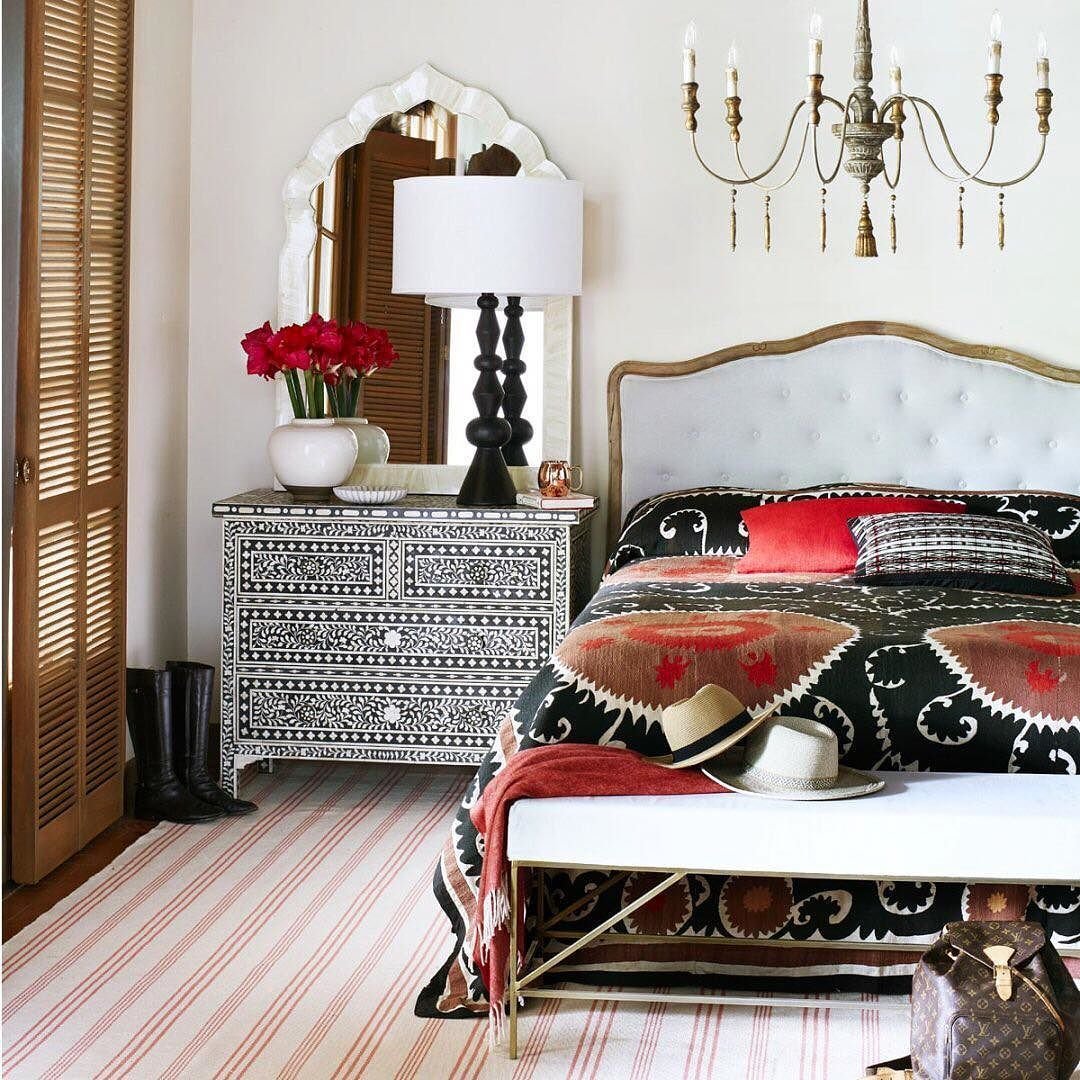 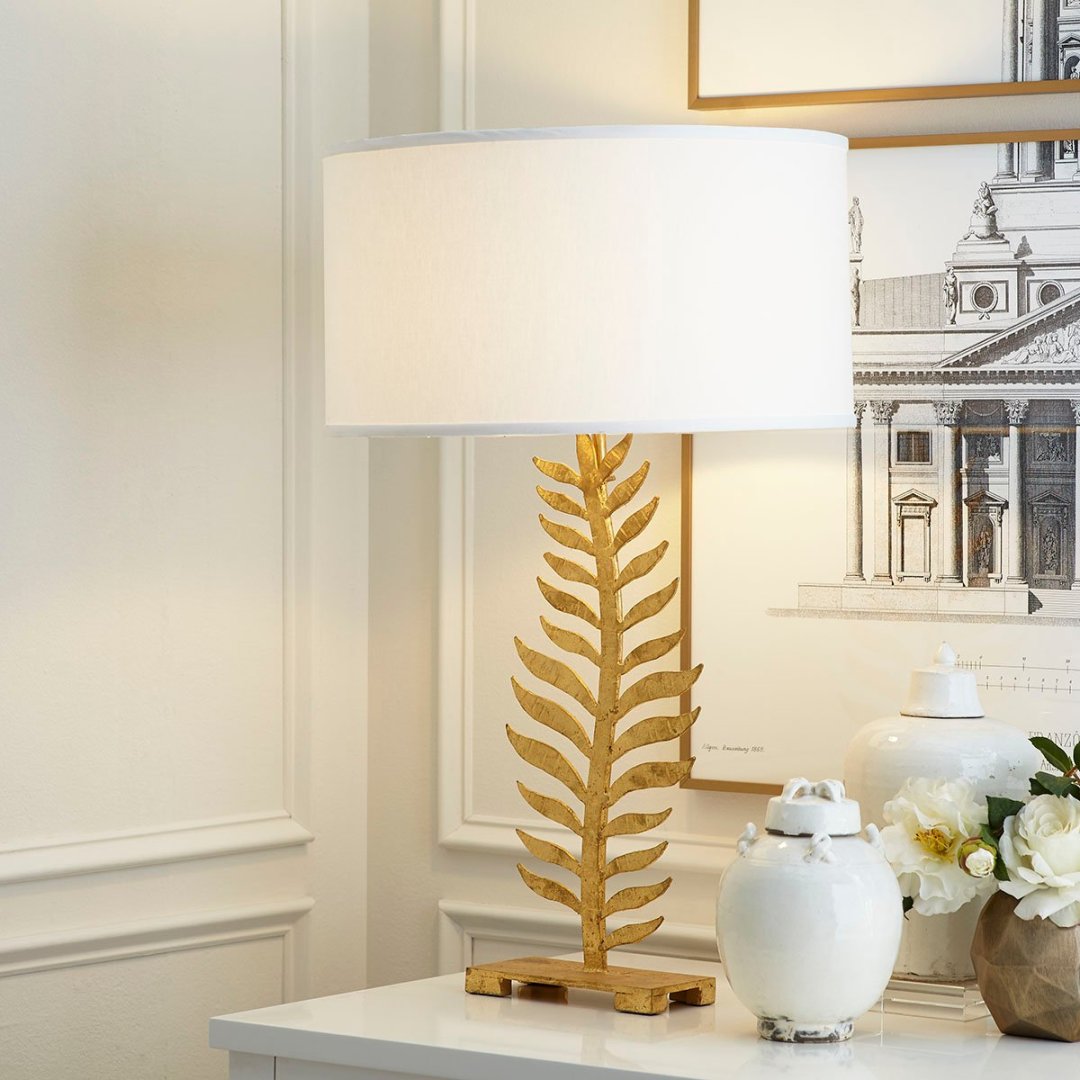 Golden-hued accents brighten a room and echo the hues of leaves outside. A gold lamp warmly reflects light, while a brass serving tray is the ideal piece for displaying pinecones or seasonal trinkets. 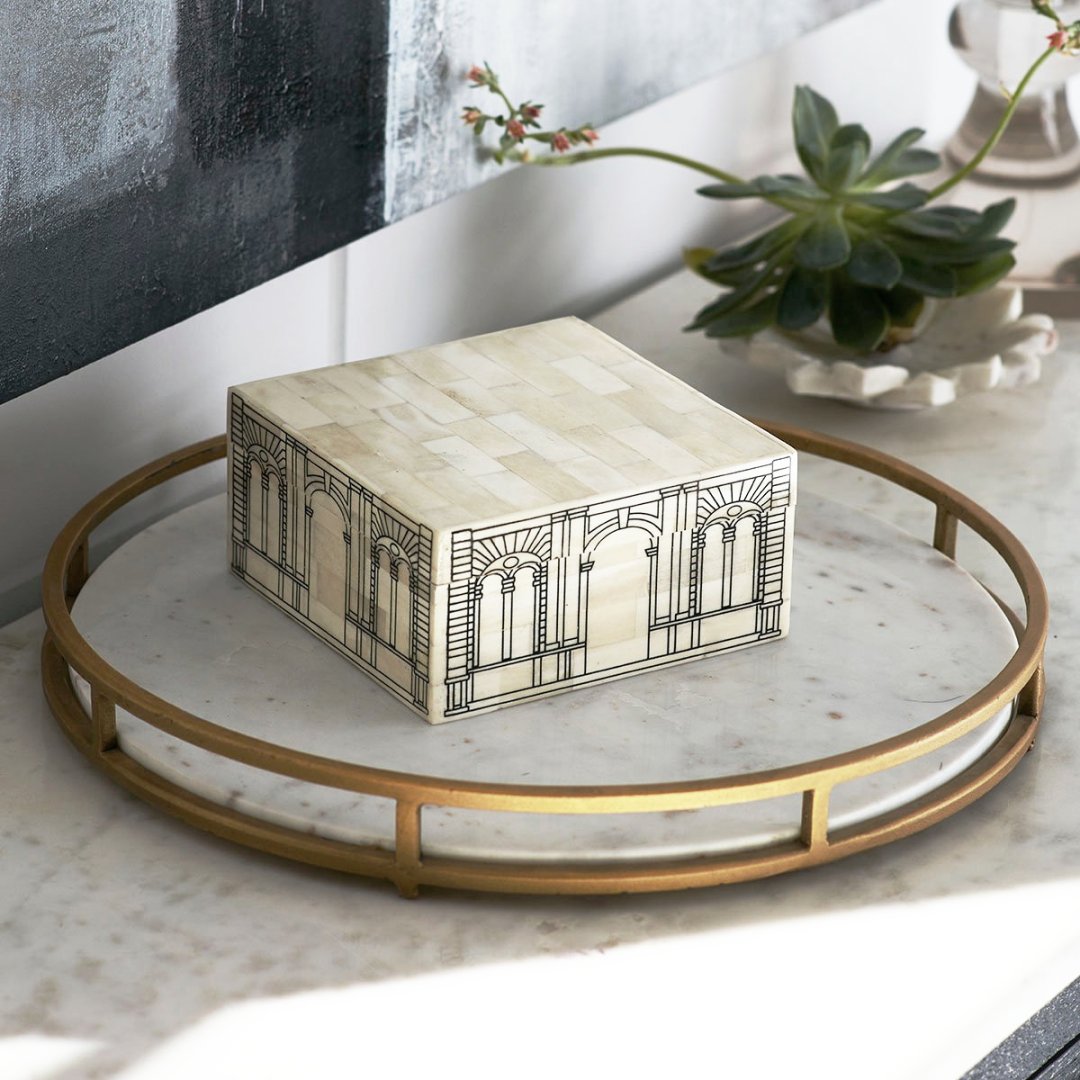 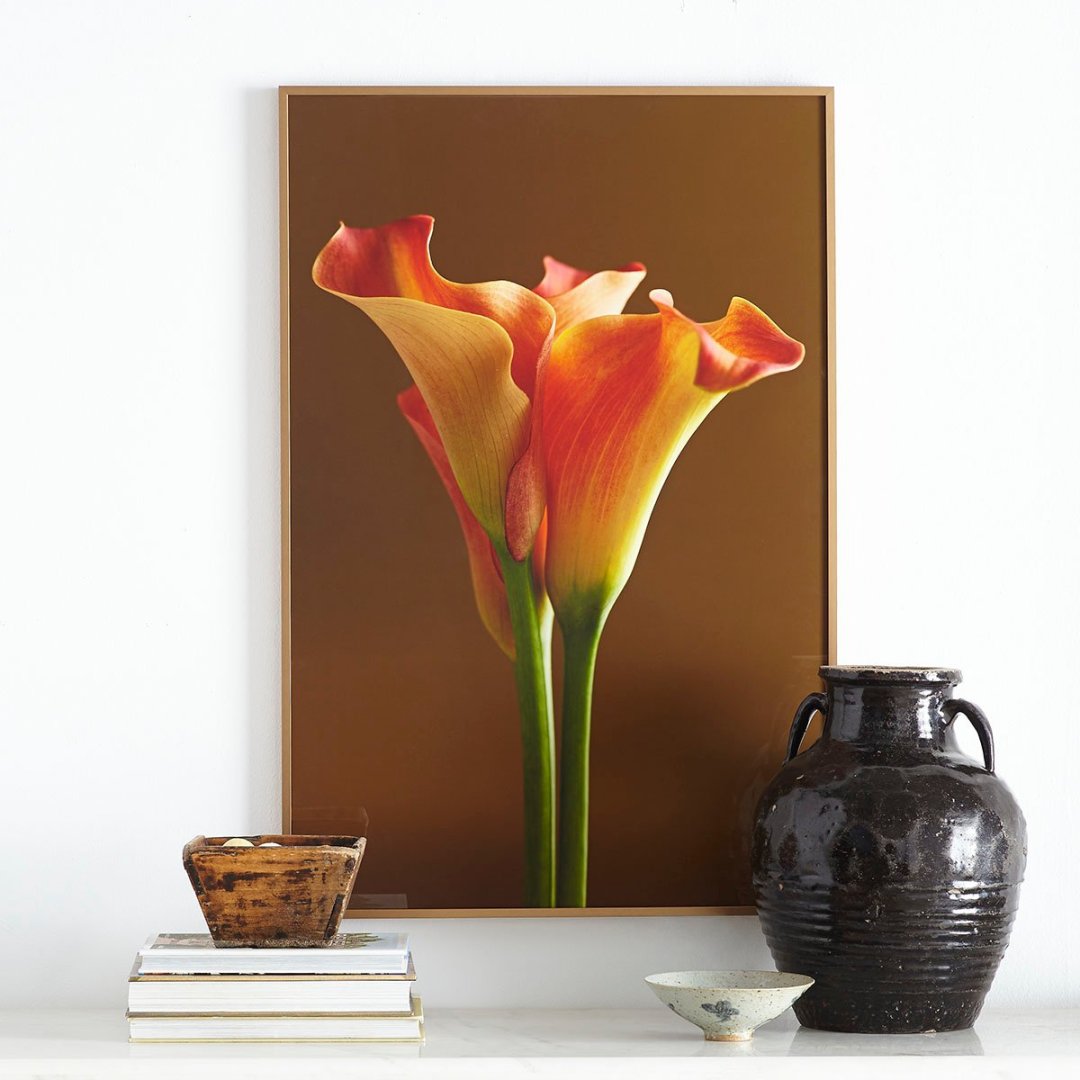 Choose a collection of wall art that brings in warm tones and holiday colors. Think golden brown, pumpkin orange or cranberry red. And remember – framing is important, too. Choose brass or gold for the ultimate autumnal aesthetic. 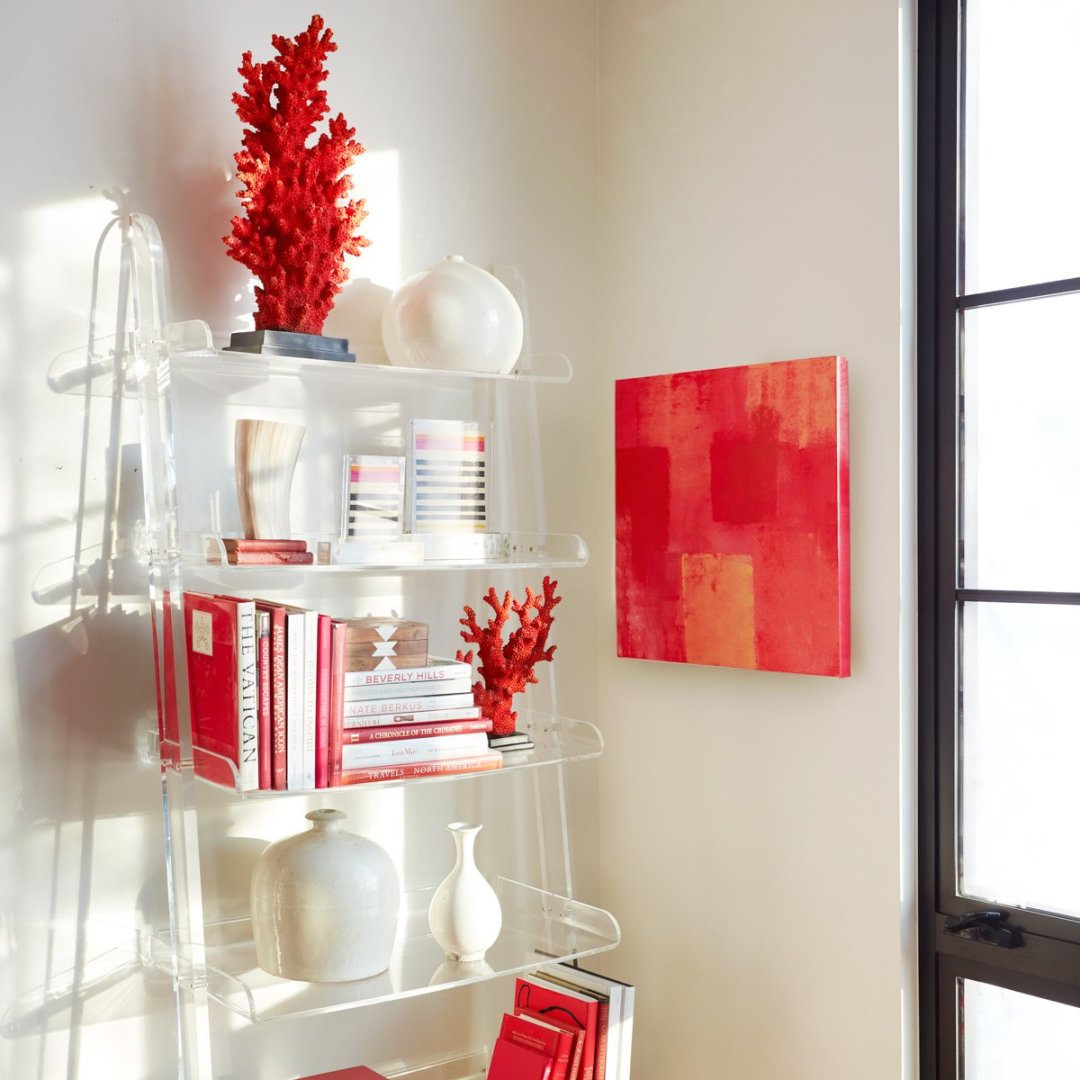 We spoke with Atlanta-based home interior designer Beth Webb about what inspires her every day, the “sensory-driven” design process she writes about in her new book An Eye For Beauty: Rooms That Speak to the Senses, and the best advice she’s ever received.

You started as an art dealer and eventually moved into interior design. What motivated that shift?

I had been dealing art privately and using our house to show the artists I was representing at the time. We were hosting a dinner party one night and one of our friends attending was vice-president of the Lyndhurst Foundation (Coca- Cola Bottling). He announced they were purchasing an 1892 house for their new offices and were looking for a designer to make the house look more like a home than a corporate entity. I asked whom they were considering, and he turned to me and said, “I think you should do it.” To which I replied, “But I’m not an interior designer.” His retort was, “No, but you should be.” The rest is history.

I continued to do both art and interiors for a while until eventually, I found I was doing much more with interiors than art. With decorating, you are always able, and must, incorporate art. So even though I no longer represented artists, I was still, in the end, buying art for my clients – the very best of both worlds.

What inspires you every day?

As designers or creative people, we are all seeking inspiration daily, aren’t we? One word – wanderlust – I think says it all. Travel, above all else, is forever my number one answer as far as inspiration goes. When I reflect on my life thus far, all of it has revolved around travel, including my career trajectories. It’s all been one big excuse to fuel that passion. I share that with all of you at Wisteria as I often travel vicariously and virtually through you and many others on Instagram. I call it “going down the rabbit hole.” I’ve found the most amazing people, places and things through all I follow and those that follow me. I could wander aimlessly from one feed to another on a quiet Sunday afternoon, couldn’t you? It’s truly become a global world – the modern day National Geographic or Town & Country Travel. Oh the places you’ll go.

You’re known for “sensory-driven” design. Can you speak about how you incorporate the five senses in your work?

When you embark on writing a book, you spend quite a lot of time dissecting the why’s and what’s of your work. The idea of home to me is a multi-sensory experience, and it’s every bit an altogether visceral encounter. We recently put our house on the market, and as I was getting it ready to show, I could not stop thinking about the overall perception that the complete stranger would have stepping through the front door.

So I proceeded to go through all of their senses in my own mind, one by one. What is the first thing you see? Is it a beautiful floral arrangement on the foyer table? Are there roses in the vase paired with tuberose for scent? Are the lamps on in every room with sunlight streaming through the windows? Are the linens on the bed starched and ironed and the pillows fluffed? Is there Sinatra playing in the background? More importantly, does this home welcome you on every level and invite you to stay?

What trends do you see coming this fall?

Well I’m not particularly interested in that word, and it’s actually somewhat of a four-letter word for me. I think the globalization of social media has everything all over the place. I love the word catawampus, and that’s how it all feels at the moment. Interiors, fashion, art, everything. However, shoulder pads seem to be making a comeback – hello, ‘80s. Everything old is new again!

My grandfather used to say, “Honey, everyone puts their pants on one leg at a time.” He was a gentleman and a scholar, a man of great integrity. What he meant by that was, we are all just people doing our best every day to get through life – no better, no worse than the other guy.

Join us on Wednesday, September 19, 2018 from 5 p.m. to 7 p.m. for a book signing and presentation by Beth Webb at our Wisteria Dallas store.

You’ve picked out the perfect furniture and even found a few accent pieces to bring it all together, but something’s still missing. Your eyes look up, and you see it: an empty wall, begging for artwork. You know you should fill the space, but you might be wondering where to begin when creating your own gallery wall. At Wisteria, we believe the best place to start is with inspiration. Here are five design ideas to spark your creativity.

One gallery wall trick to make a space feel taller is to hang your wall art a little higher than eye level. It draws the gaze up, giving the illusion of higher ceilings. And for a contemporary design element, let frames sit flush against one another. A collection of four matching pieces works well for this.

TIP: Choose vertical pieces with similar colors that are part of the same collection. 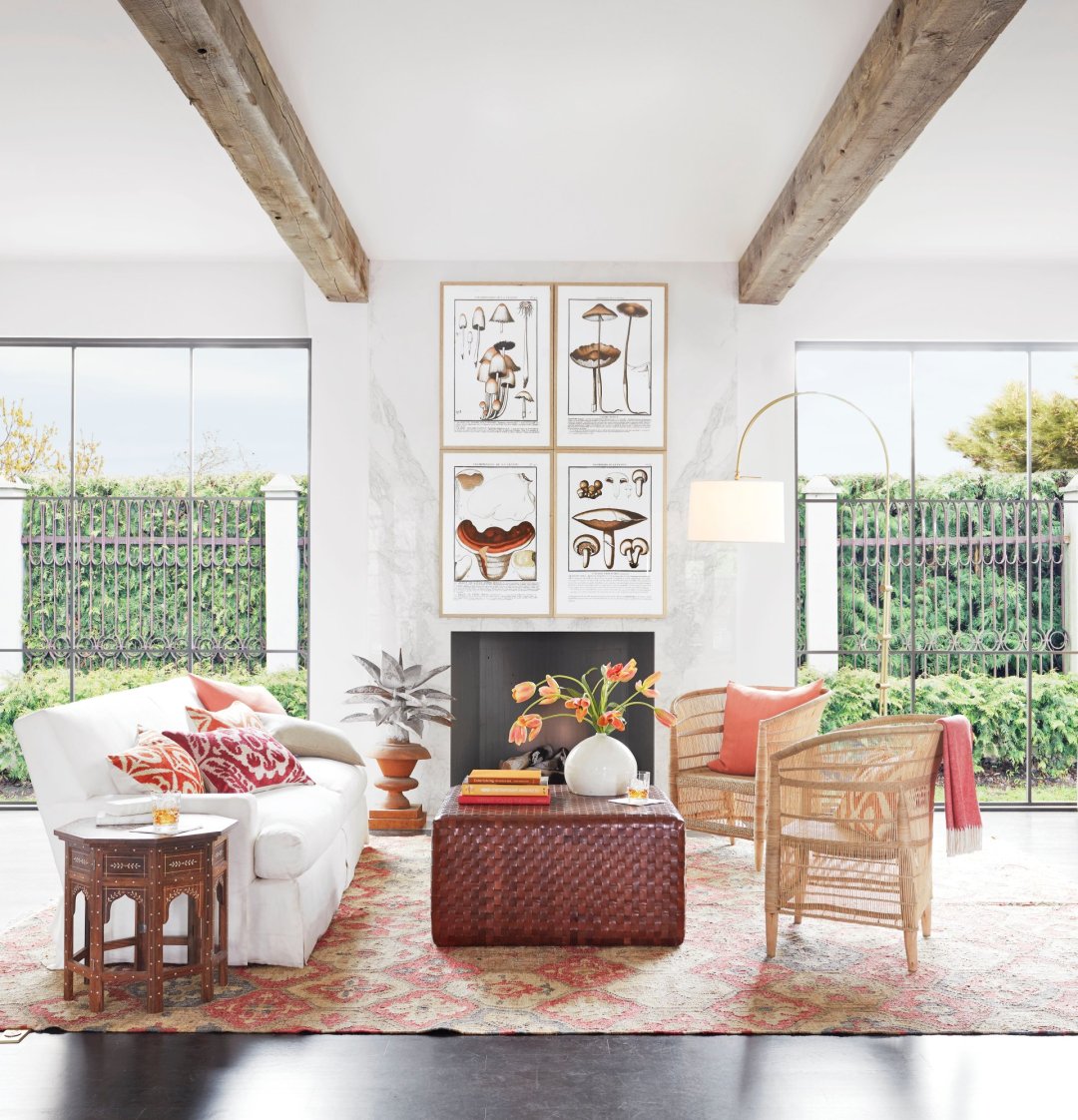 2. Scatter on a Coffered Wall

Art doesn’t have to hang on flat walls anymore. A new trend we love is incorporating a coffered wall or even bookcases or built-in cabinetry as the backdrop to your wall art gallery.

TIP: Scatter pieces of various sizes and subjects at different heights, but keep things in harmony with a matching color palette. 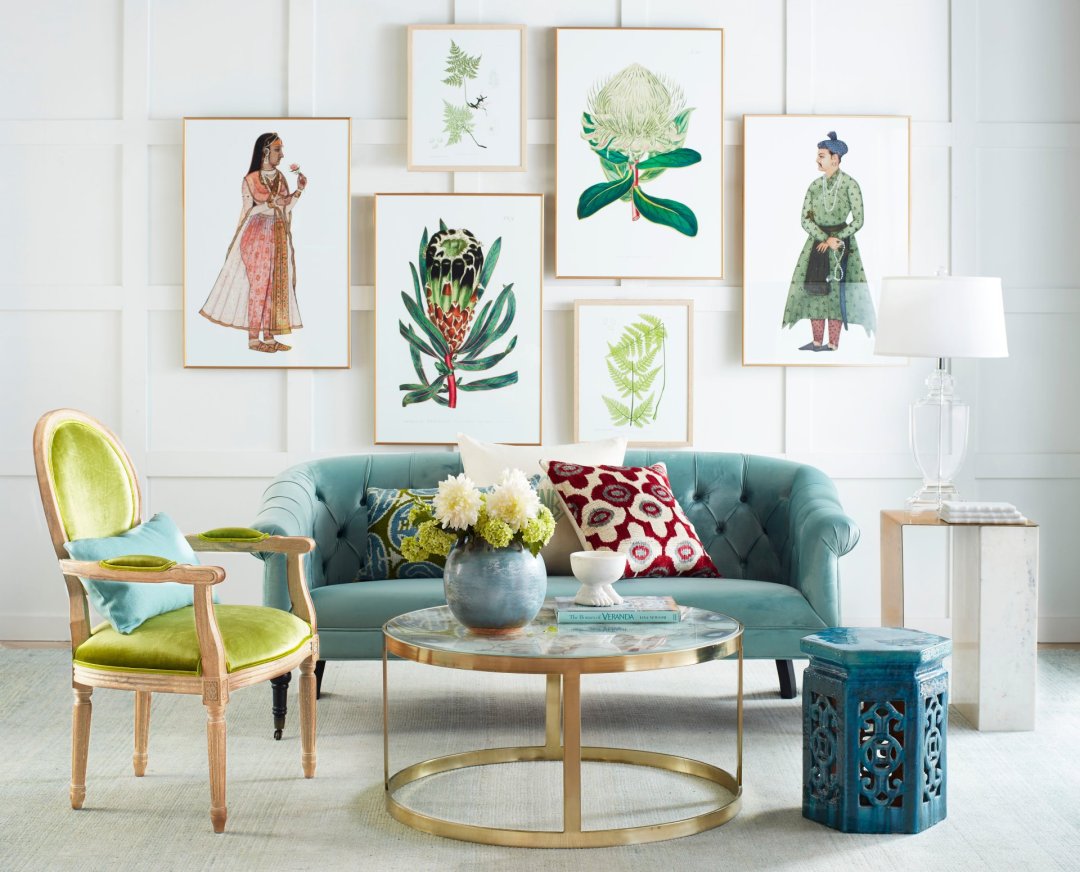 Tell your guests a little about yourself with an assortment of pieces featured as a collection. The goal here is to take what inspires you and display it for all to see.

TIP: Mix subjects, orientation (vertical and horizontal), and mediums, while balancing the look with matching frames or by sticking to one color palette. 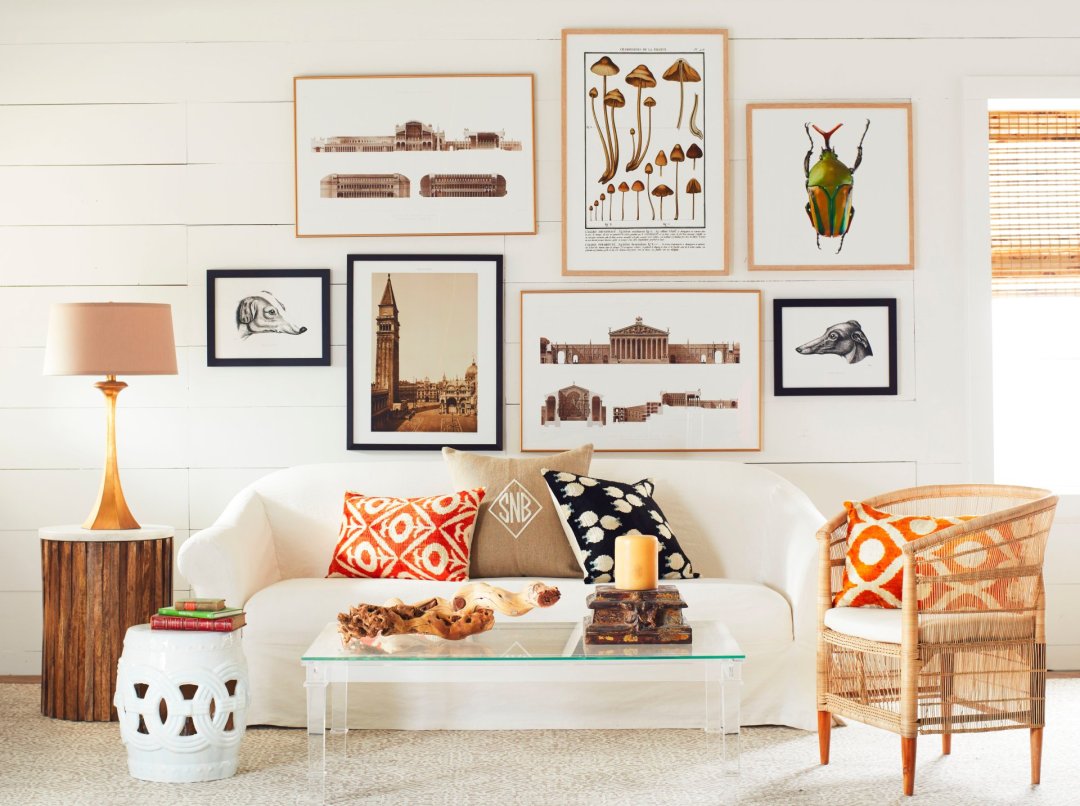 4. Add Dimension with a Mirror

If you like a more minimalistic look, a monochromatic collection of the same subject and medium is cool and contemporary for your wall art gallery. Make sure, however, to bring in some dimension. An easy way to achieve this is a split grouping with a mirror in the middle.

TIP: Hang pieces symmetrically for a clean design. Also, remember your monochromatic theme when choosing a mirror – this ensures the mirror is part of the ensemble. 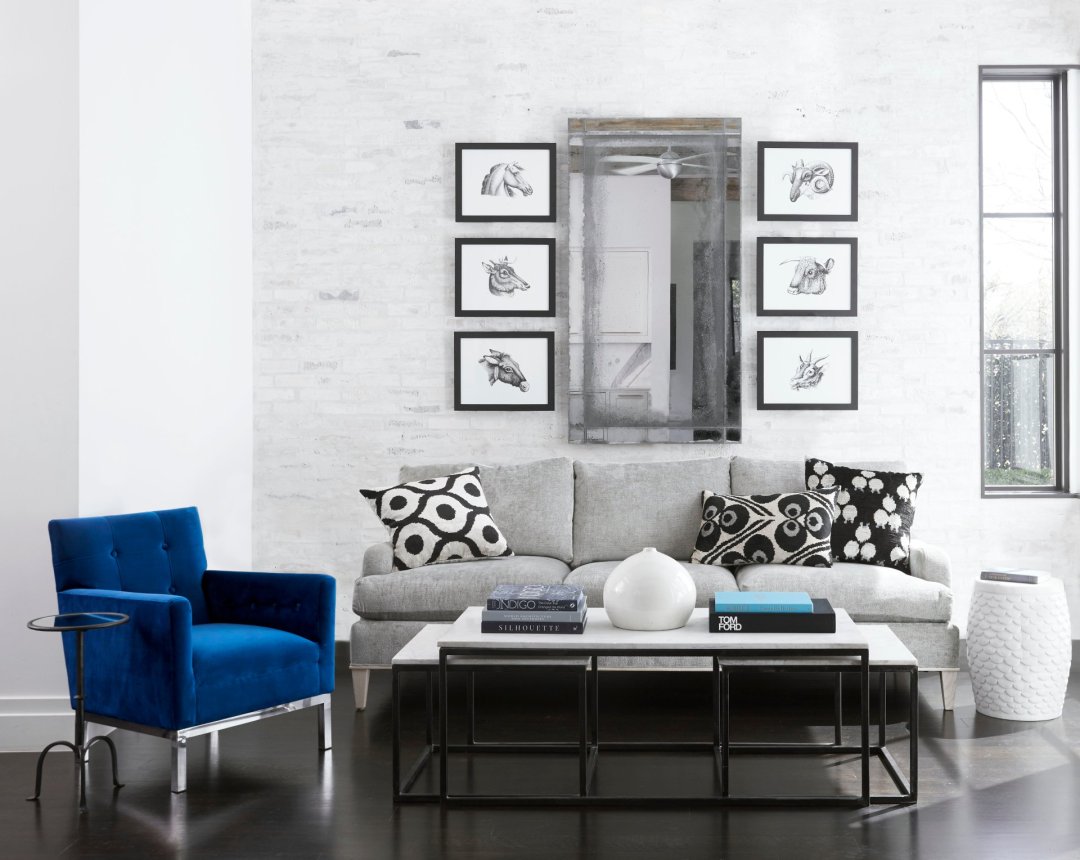 To cover an especially large wall space, you’ll need quite a few pieces. To prevent overwhelming the eye, choose a collection with the same subject matter in neutral colors. This allows you to sufficiently adorn the space without being too obtrusive.

TIP: Arrange these pieces in a grid or symmetrically to keep the collection understated and allow other design elements nearby to stand out. 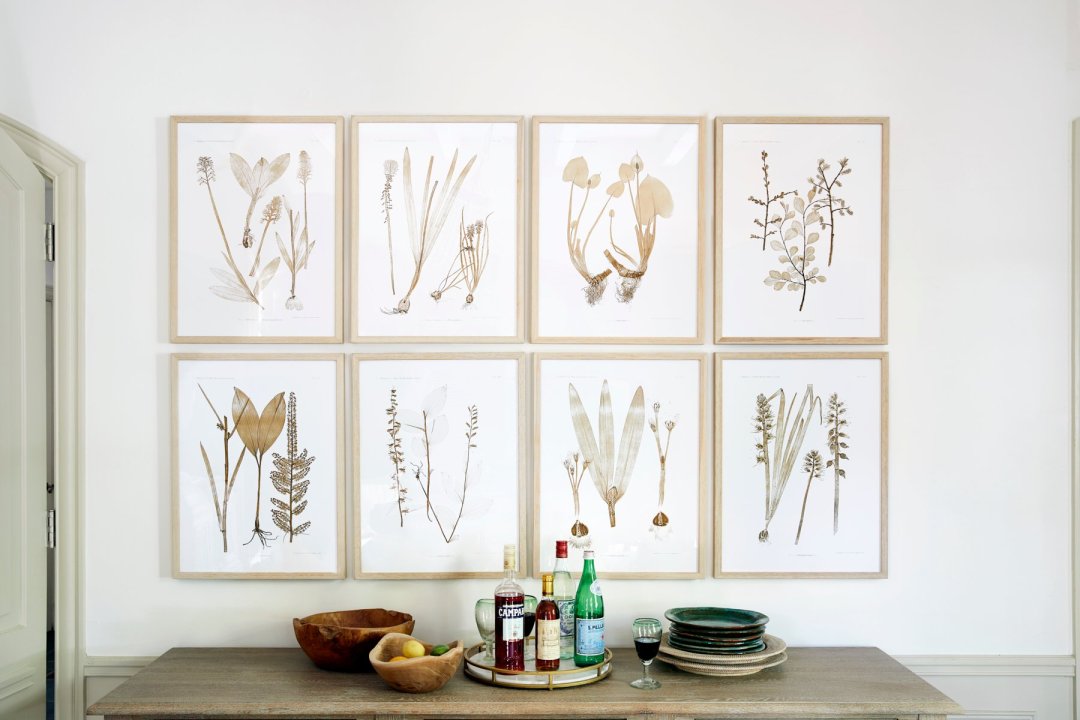